Pawtucket, RI (July 13, 2018): The Rhode Island Trucking Association (RITA) today questioned whether the standing weekly appearance by RIDOT Director, Peter Alviti, on the Gene Valicenti Show should be considered a form of a ‘in-kind’ contribution to the Raimondo campaign. Typically appearing between 8am - 9am every Thursday, the RIDOT Director is on air for approximately 30-45 minutes. During this time Mr. Alviti, praises the progress of RhodeWorks as an accomplishment of the Raimondo administration with little or no opposition from the show’s host. RITA suggests this unpaid airtime is clearly intended to influence potential voters and therefore should be considered a form of unpaid advertising airtime and in violation of campaign contribution laws.

“While we acknowledge the public service aspect of his interaction with motorists frustrated with Rhode Island’s deplorable roads, the majority of Mr. Alviti’s airtime is spent fielding softball questions from host Gene Valicenti in a friendly, bias and controlled environment – this prime morning-drive airtime should have a price” states Christopher Maxwell, President/CEO of the RI Trucking Association. “Given Mr. Alviti’s airtime amounts to what can only be described as a free, 30-minute propaganda-filled infomercial touting this administration, it is reasonable to conclude that Mr. Valicenti, given his direct oversight of broadcast content, may be in violation of rules governing in-kind campaign contributions”.

Maxwell concludes, “If one were to calculate the hourly cost of RIDOT’s Thursday morning infomercial using typical peak-time broadcast advertising rates, it would likely amount to tens of thousands of in-kind advertising dollars which clearly exceed the limitations on personal campaign contributions, and quite possibly the rules governing corporate contributions. We believe this potential violation needs to be looked into”.

The Rhode Island Trucking Association, Inc. (RITA) is a chartered, non‐profit organization whose membership is made up of one truck owners; fleet owners; private and for hire motor carriers; and allied industries including manufacturers, dealers, service stations and suppliers. Since 1931, RITA has represented and promoted all motor carrier interests on the state level. RITA, the only statewide trucking association, has been a member of the American Trucking Association since 1944. 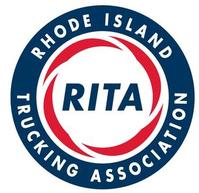