“It is critically important to reiterate that, regardless of whose traffic counts one choses to accept, or whose public comments one choses to believe, the bottom line is that RIDOT is at the center of a federal law suit essentially stating that every penny collected by Mr. Alviti’s gantries is done so in an unlawful manner and the State of Rhode Island remains in violation of the Commerce Clause of the United States Constitution”, states Christopher Maxwell, President/CEO of the Rhode Island Trucking Association. “Unfortunately, the ultimate price of the RhodeWorks tolling scheme is going to cost the Rhode Island Taxpayer an exorbitant amount of money without delivering any improvements to our failing roads and bridges.”

RITA’s opposition to tolling has always been rooted in protecting trucking companies, their employees, and the state’s small businesses who rely on trucks. For Director Alviti to intentionally fabricate a false element of tension involving organized labor is outrageous and extremely irresponsible.  “Of the many misleading statements during Mr. Alviti’s appearance on the Gene Valicenti Show Thursday morning, perhaps the most egregious and reckless was his suggestion that truck drivers wanted the tolls, and the trucking company owners did not”, Maxwell continues.  “Clearly this is a blatant attempt to suggest a divide that has never existed - ever. Mr. Alviti must stop acting as a political operative for this administration and report truthful and accurate information to the taxpayers he serves”.

RITA has a long history of serving the best interests of the industry and its diverse membership which includes companies employing union and non-union workforces. Approximately 95% of Rhode Island Trucking Association’s membership is comprised of Rhode Island-based businesses, of which 65% are local small businesses operating trucks for the purpose of transporting goods and services throughout the local region.

“Our long-standing, completely unanimous opposition to RhodeWorks’ truck-only tolling has further galvanized our entire industry”, emphasizes Maxwell. “We stand 100% united in truth that tolling only trucks is illegal and furthermore, has a negative financial impact on everything we transport, and nearly everything Rhode Islanders consume.” 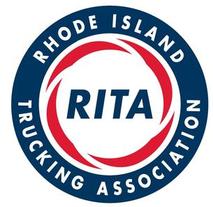