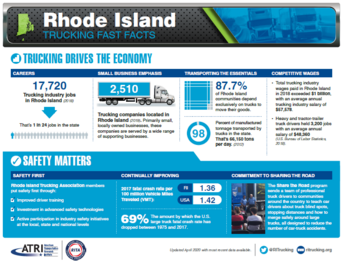 Pawtucket, RI - With yesterday, May 27, marking five years since Governor Gina Raimondo blind-sided the trucking industry and introduced the truck-only toll scheme as part of the Rhodeworks program, the Rhode Island Trucking Association today, releases real time data that refutes the false narrative that the General Assembly relied upon to pass the controversial legislation in February, 2016.

The report, Rhode Island Trucking Fast Facts, released by the American Transportation Research Institute(ATRI) as part of an annual benchmarking issue for all 50 states, provides data on matters ranging from the financial contributions of trucking to infrastructure to the economic value of industry job creation and freight movement to safety.  For example, the report highlights that the typical tractor-trailer pays a total of $15,402 in state and federal highway user fees and taxes.  Of this, it pays $6,336 to Rhode Island.  This is in addition to what it pays in state business taxes and truck tolls.  Further to that point, ATRI reports that trucking industry in Rhode Island paid approximately $67 million in federal and state roadway taxes(2018 figures).

Additional information from the report is as follows:

“Since May 27, 2015 to the current pandemic crisis, our state’s leaders, specifically Governor Raimondo, have devalued and needlessly denigrated our industry.” said RITA President Chris Maxwell.

"Trucks are an integral economic driver of our state and we hope that our citizens can rise above the baseless rhetoric and recognize our industry’s contributions,” he added.

Rhode Island Trucking Fast Facts is [below] for review and reference.  ATRI uses data ranging from 2017 to 2019 for the report.